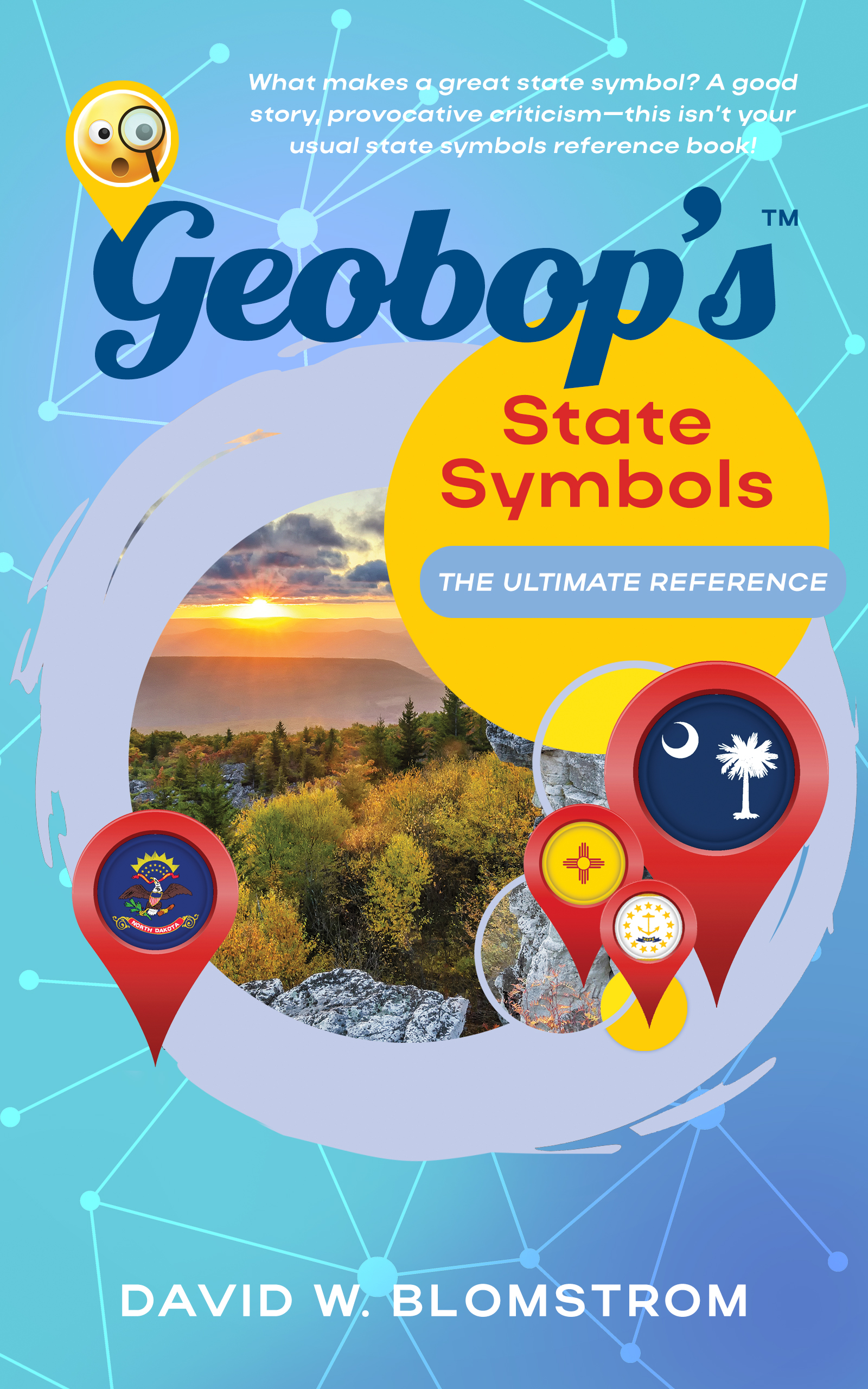 Below is a list of 10 features that make Geobop’s State Symbols a major improvement over the competition.

* I marked #6 with an asterisk, because I decided to publish the state report cards as a separate book and may therefore delete that material from Geobop’s State Symbols.

If you think state symbols are boring, you’ve been reading the wrong books.

Shankle’s book mentions virtually no ecosymbols other than state flowers, birds and a handful of trees. There’s virtually no mention of “cultural symbols.” The Shearers’ book features chapters focusing on symbols of state (e.g. flags, mottoes) but just three groups of ecosymbols—flowers, trees and birds. After wading through an ocean of stamps, state governors and universities, it features a chapter titled “Miscellaneous Official State and Territorial Designations.” It’s simply a list of additional state symbols with the year each symbol was adopted.

Neither book really digs into the stories behind the symbols, aside from Shankle’s excellent research on state nicknames. To be honest, I have to admit that many state symbols are indeed a big yawn. But if you dig deep enough you can often find some interesting stories, and no one has dug deeper than I have. 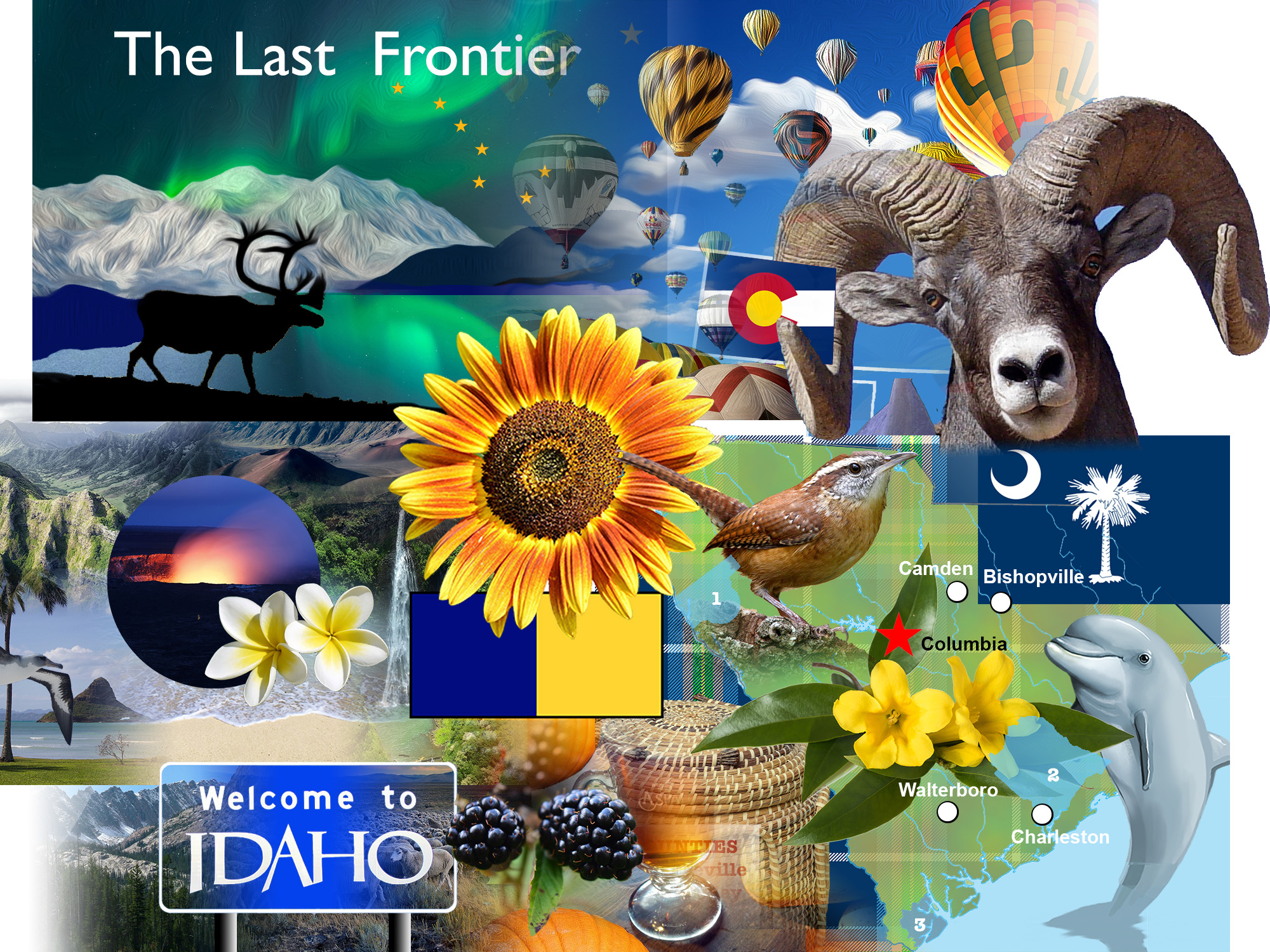 Most books and websites focusing on state symbols are politically correct in the extreme. Afraid to rock the boat, they’re loathe to say anything critical about state symbols.

Geobop’s State Symbols is the first reference to grade each state’s symbols, and there are a lot more F’s than A’s.

Hey, if students are expected to miss recess so they can study for their stupid, corporate-mandated high-stakes test, then legislators should be held accountable for the symbols they adopt.

To be brutally blunt, Geobop’s State Symbols is for mature adults. Some of the political commentary is guaranteed to strike a nerve, whether you’re a liberal or conservative.

Some might argue that a good reference should be impartial, unbiased. But Geobop’s State Symbols is more than a reference. It’s also an educational tool, and no rational, ethical person would promote the growing list of official firearms and military symbols as a wholesome trend. Indeed, legislators in various states are increasingly fighting back against the sheer number of state symbols.

Geobop’s State Symbols will include all the state symbols adopted through 2021 (and possibly 2022).

Geobop’s State Symbols is part of a series of books focusing on state symbols, most of which will be published by the end of 2022. The books are supported by this website, which is probably the best state symbols web site on the internet already, even though it may not be finished until 2023.

If I gave the impression that I find all state symbols interesting, let me set the record straight: Many, if not most, state symbols really are pretty boring.

That’s why I describe Geobop’s State Symbols as a somewhat stuffy reference. Actually, a better word might be tedious. There are simply too many redundant and even stupid state symbols designations to document.

Even worse are symbols that are politically incorrect, to put it mildly. Take Tennessee’s official sniper rifle—please.

A long-time political activist, I have lots to say about such symbols, and I don’t mince words. This is a book for mature, intelligent adults, not people who like to mindlessly recite the Pledge of Allegiance while listening to the Star-spangled Yawner.

Geobop’s State Symbols is simply too big to be published as a paper book, and most commercial resellers won’t even sell it as a digital book because of its file size. The book will be published near the end of 2022 or early 2023 and will only be available as an epub/ebook. It will only be sold on my websites and will tentatively be priced at $100.

Unless you’re a reference librarian or an individual with a fanatic interest in state symbols, you would probably be better off choosing My State Symbols Book.